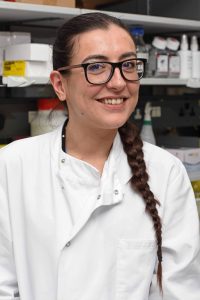 My main research interest is the immune functions exert by the airway epithelial cells in children. I am currently involved in the Breathing Together project, which aim to investigate the development of the airway epithelium and the resident microbiome in children in the first three years of life. I obtained my BSc in Biotechnology and Molecular Medicine at the University of Palermo, after preparing my thesis in the Universitat Autonoma the Barcelona. To gain knowledge on culturing highly differentiated airway epithelial cells I worked as cell culture technician for one year in the Broke Lab in Southampton. During my PhD at the Leiden University Medical Centre (LUMC) and the Netherlands Organisation for applied scientific research (TNO) I studied the effect of diesel exhaust and cigarette smoke exposures on primary bronchial epithelial cells cultured at the air-liquid interface. I started in Inflammation Repair and Development (IRD) Section in April 2017.

Research within the Lloyd lab focuses on the interactions between resident lung cells and infiltrating inflammatory cells in order to determine how these interactions influence the development and resolution of various pulmonary diseases. We are a multidisciplinary group of immunologists, cell biologists and clinical academics who aim to understand the molecular mechanisms underlying common lung diseases, including asthma and fibrotic lung diseases.